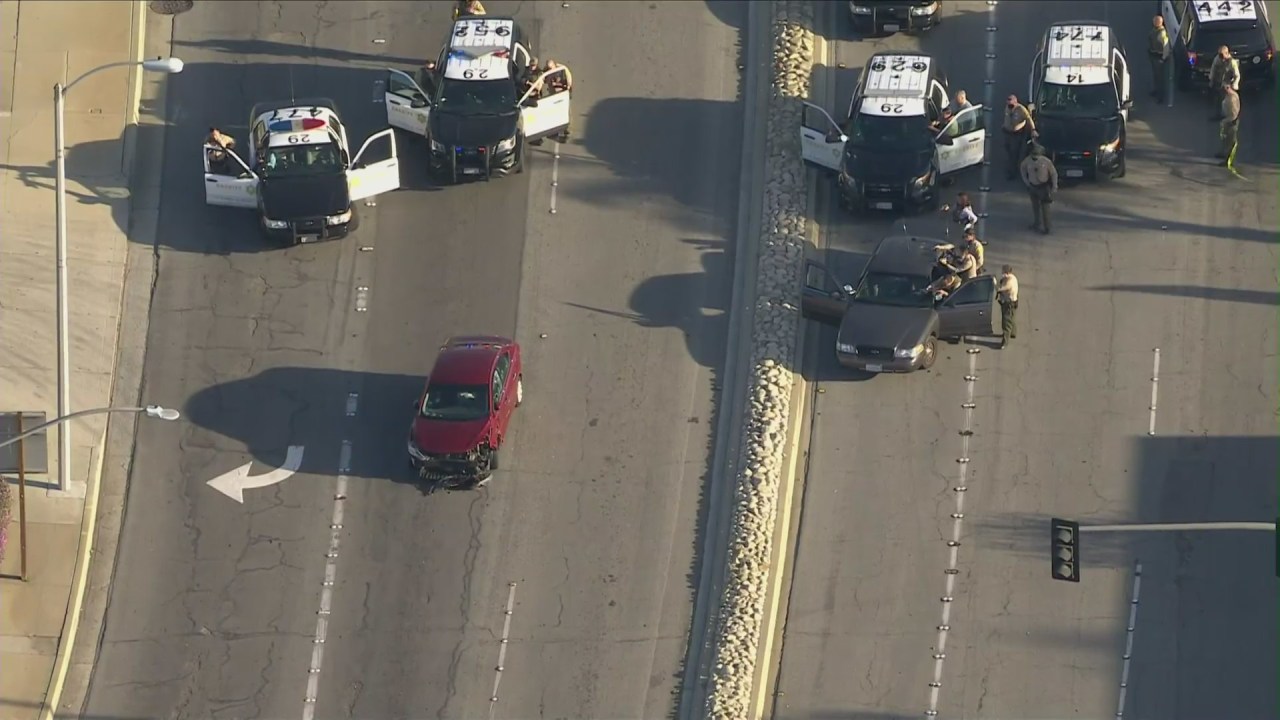 This is an archived article and the information in the article may be out of date. Please look at the history’s timestamp to see when it was last updated.

A woman from Pomona was arrested after an hour-long standoff with sheriff’s deputies on Tuesday that ended after tear gas was deployed in the vehicle moments before a 9-year-old girl stepped out and threw herself in the arms of a SWAT officer.

Authorities say the incident began around 3 p.m. when the suspect repeatedly struck a passer-by. The victim of this collision then went to the Walnut Sheriff’s Station for assistance.

A chase eventually ensued with the suspect and authorities on the surface streets, where the driver of the red sedan veered into several cars, before coming to a halt on Diamond Bar Boulevard near Palomino Drive.

The Los Angeles County Sheriff’s Department said they did not know a child was in the car.

MPs attempted two PIT maneuvers to stop the driver, but it wasn’t until she hit another vehicle that the chase ended.

Sky5 was over the chase as the red sedan drove from Chino to Diamond Bar at around 3:55 p.m. with several vehicles from the Sheriff’s Department following close behind.

The red vehicle made contact with a number of cars as it attempted to pull away from the MPs.

After passing an intersection, the driver collided with other vehicles that were stopped at a light, eventually stopping after colliding with a silver vehicle.

The silver vehicle stopped first and then exited the immediate area.

The front of the red car appears to have been damaged. At least eight assistant vehicles pulled up behind the red car with officers’ guns in hand, while the driver remained inside.

A stalemate continued for hours. The driver and assistants were still at an impasse when Sky5 left the scene at 5.35pm. the red vehicle.

Deputies and a sheriff’s crisis team were trying to negotiate for the suspect to comply with authorities, the sheriff’s department said, adding that she was now wanted on a hit and run involving multiple vehicles and a deputy vehicle.

The ministry previously said the driver was wanted in a traffic collision involving an assistant.

The woman was eventually arrested after the deployment of a drone, or “unmanned aerial vehicle”, and the use of tear gas.

“No one knew the child was in the car,” Lt Todd Knight of the Sheriff’s Department later said. “[There were] multiple efforts to discuss it with the suspect at the time.

Chino resident Brian Avalos said he was on his way home when his Volkswagen was hit, injuring him.

â€œIn a split second, she fell while flying, hit me and hit another car next to me,â€ said Avalos.

No further details were immediately available.