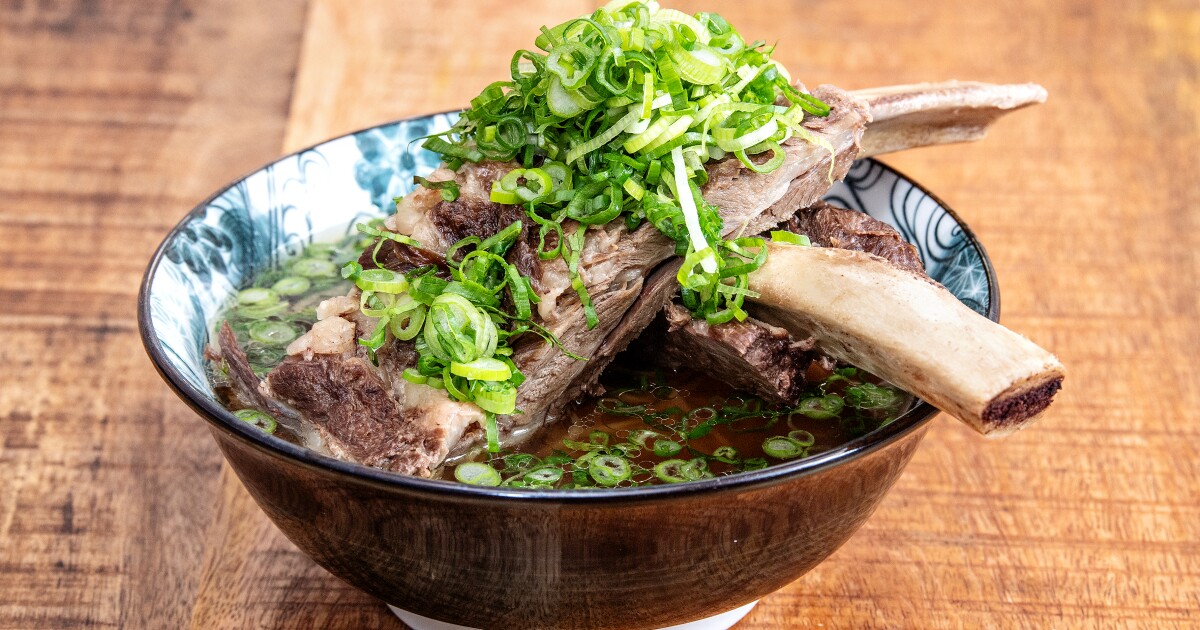 When Viet Nguyen finally got the lease for his first restaurant, he wasn’t sure what he was actually going to cook. The choices boiled down to ramen or pho, and all he knew for sure was that he wanted to open a noodle bar – the starting point of a David Chang-inspired roadmap.

â€œI was always thinking of ramen. I was going back and forth. I’m like, ‘I’m trying to be someone I’m not,’ â€recalls Nguyen. â€œI know pho. I grew up on it. There is a story to be told.

Nguyen committed to what he knew, and in 2014 the SÃºp Noodle Bar in Buena Park became the first chapter in a restaurant story he continues to write. He now runs Kei Concepts (named after his daughter), a Huntington Beach-based restaurant group with a roster that also includes Vox Kitchen and Gem, both in Fountain Valley.

Nguyen’s culinary origin story began in southern Vietnam, where he, his parents, and four younger siblings lived in two rooms on the top floor of their family’s bustling chemical factory in Ho Chi Minh City. . A curious child with a perpetual appetite, Nguyen was drawn to the chaotic symphony of the factory kitchen and cafeteria, where 4,000 hungry workers entered for meals twice a day.

â€œThe coordination between each part of the kitchen, and they only have 30 minutes for lunch – that’s the trickiest part,â€ Nguyen said. “It was crazy for me.”

Nguyen watched the kitchen intently. He remembers the arguments he had heard but marveled at the teamwork. He was a big kid, and even then he remembers that the rice pots were six times his size. When the meal service was over, he would sometimes slip into the kitchen to shape leftovers into his own creations.

â€œI’m so drawn to it. Everyone would be in front, and I was the only kid – 6, 7 – running [around] in the back. I was fascinated by how it all worked, â€said Nguyen. â€œAnd every day they would clean up and start over. “

In 2002, when he was 16, Nguyen moved to the United States on his own, settling with an aunt and uncle in the San Fernando Valley. While enrolled in Cleveland High School, he found a job at Pho 999, a Vietnamese restaurant in Van Nuys. â€œI didn’t speak much English at the time, so it was easy. My people were there, â€Nguyen said.

In 2009, his family bought Pho Pasteur in Rosemead, where he helped run the restaurant for a year and a half before moving to Le Cordon Bleu Culinary School in Pasadena. Nguyen left school before graduating, but followed his instructor, Chef Jimmy Wang, currently Culinary Director of Panda Express, to work in the kitchen of Wang’s now closed San Gabriel restaurant, the Hot Stuff. Coffee.

In 2011, Nguyen left the kitchen to work in an IT company that built and managed point-of-sale systems for restaurants. He had always had an interest in technology, and the position allowed him to make the most of his time watching a busy kitchen run, from his top-floor perch in Vietnam to his experience of almost any restaurant job.

â€œI started by working as a diver, clerk, bartender, barback. You name it. Line cook, preparation cook. I know all the positions in the restaurant, â€he said.

Nguyen worked on an innovative iPad-based point of sale system that found its way into Gordon Ramsay’s reality show “Kitchen Nightmares”. The celebrity chef then had the system installed at his LA restaurant, the Fat Cow, where Nguyen became a computer technician while also doing occasional shifts in the kitchen when the cooks called.

â€œI learned to manage a restaurant. Their COO was awesome so I learned a lot from her, â€said Nguyen. â€œKnowing the point of sale system, you know the whole restaurant. It’s a bit like the brain of the restaurant.

As he worked on the story he wanted to tell with his first restaurant, Nguyen considered his audience.

The SÃºp Noodle Bar was to open in the middle of a busy shopping center on Beach Boulevard in Buena Park, a bustling thoroughfare dominated by Korean restaurants, markets and businesses; the mall was anchored by crowd-pleasing people like H Mart, Daiso and 85 Â° C Bakery Cafe.

There were already two pho restaurants across the street, but after trying them Nguyen was convinced he could do better.

Nguyen spoke to his owner and neighbors to get a better idea of â€‹â€‹the community and how best to tailor his restaurant to his tastes. He researched the best Korean restaurants in Buena Park to determine what people liked and where he could potentially fit in. They all pointed him to Hanyang, a local favorite (and a likely stop for a future episode of What We’re Into), popular for his galbi tang, a prime rib soup.

â€œI said to myself: ‘This is genius’. What if I put that [beef short rib] bone in pho? said Nguyen, who immediately after trying Hanyang’s galbi tang bought more to take home and then stopped by a market to buy the same pieces of meat and bones.

Nguyen has finally found a supplier for his ribs, which serve several purposes. The meat from the top of the rib is cut into thin pieces for the short rib pho of SÃºp. For the rib bone pho, the bone and remaining meat is braised for four hours, giving the meat an almost soft texture, but still giving you the all-important satisfaction of shredding the meat from the bone.

But it all starts with the broth, the linchpin of all good pho.

“We [cook] our 48 hour broth just so we could develop the flavor that I grew up in Vietnam, â€said Nguyen, who despite being up in the south wanted to make a pho more representative of his father’s Nordic roots. â€œThe flavor is much more pungent, strong in cinnamon. There are only three types of spices: cinnamon, cardamom, and star anise. Very simple, and there is a lot of fish sauce in there.

The initial 24 hour cooking period for Nguyen broth begins with a shank and oxtails in a giant kettle. On the second day, hardened pieces of Wagyu fat are cut and added.

â€œIt takes another 24 hours to turn that fat into the smoke and creaminess that you will find,â€ Nguyen said. â€œYou break everything down and you cream it. The process takes time. “

In the morning, the broth is ready to be served, the aromatics are added: sautÃ©ed onions, ginger and spices. For its galbi tang-inspired rib bone pho, braised rib bones are also added to the broth.

â€œWe keep it in pho broth, and it has that pho scent throughout and it’s super sweet and tender,â€ Nguyen said. “Braising it a little longer it has more of that pho flavor that we love.”

There was a time, before culinary school, when Nguyen, who still made his stripes in restaurants in Los Angeles and Orange counties, had only a few hundred dollars and two suitcases. He slept in a friend’s closet.

At 34, Nguyen runs a thriving restaurant group. One of his roommates from those lean days would become his business partner. His siblings also joined him in the United States.

â€œI know I make a lot of big bets. Some of them don’t have to be paid for, to be honest. There are so many things that I have done that have never been successful, â€said Nguyen.

But with SÃºp, he bet on himself and what he knew best. It seems to have paid off.

â€œI focused on getting back to my roots and [to] show them what pho could be, not what pho is.