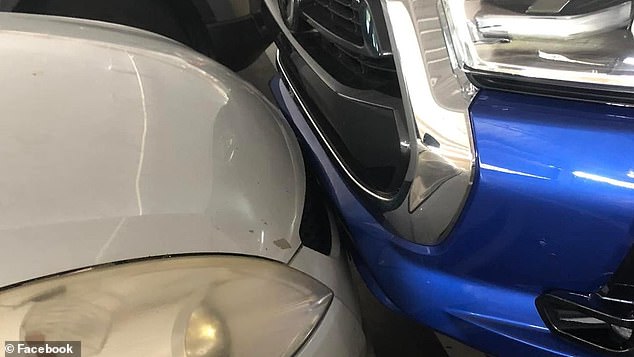 Shocking photo of two cars parked VERY close to each other sparks heated debate – can you see who was wrong?

A bizarre parking job in a busy shopping center car park near Sydney over the weekend has left locals perplexed.

A customer at Shellharbour Shopping Center took a photo of the two vehicles – a white Suzuki Swift sedan and a blue Hilux ute – parked with their bonnets touching, leaving a small dent in Hilux.

After the photo was posted online, a debate erupted not only over who was at fault and the rules around parking lot collisions, but also over why the driver would mysteriously make no effort to move his car.

“They just left it there, like you didn’t notice,” one person said.

“The blue car is over the line, so even if the white car is the one that hit, they can get away with it without paying,” they added.

One person speculated that it was some sort of display of parking lot dominance.

“I love the power of leaving it there,” they said.

Some people offered amateur legal opinions, saying that because the blue ute was over the parking line, the white car was within their rights to ring them.

“Unfortunately it looks like blue has crossed the line – so technically blue will be considered at fault based on what I’ve experienced,” the person said.

Which driver is at fault?

“Yeah, blue is at fault anyway, because it’s way over the line,” another person agreed.

The person who posted the photo said the cars were parked next to them at Shellharbour Bay shopping centre, about an hour south of Sydney.

‘A small white Suzuki Swift and a blue Toyota HiLux Ute with a disabled parking sticker. One just hit the front bumper of the other and decided to park right there. they said.

But they couldn’t solve the mystery of who hit whom, because they arrived later.