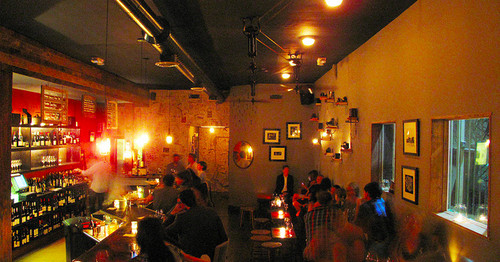 An 84-year-old driver crashed into a vehicle in the Bar Covell in East Hollywood on Wednesday afternoon, injuring two pedestrians who were taken to hospital with the driver. The driver is said to be in stable condition, while the two 27-year-old victims are stable but suffered serious injuries as a result of the accident.

ABC-7 reports that the driver lost control of the vehicle and struck the front of the popular wine bar and restaurant, crashing five to 10 feet into the restaurant at noon yesterday. However, there are a few different versions of what happened circulating in the Los Angeles media. The Los Angeles Times questioned a Los Angeles Fire Department spokesman who said the injured victims were ‘assumed to be restaurant patrons’, but Bar Covell does not open until 4 p.m.; Meanwhile, ABC-7 reported that the injured were pedestrians struck as the driver attempted to turn left onto Hollywood Boulevard. ABC-7 also reported that the driver was also accelerating before crashing into the building.

Rescuers removed the car from Bar Covell after the crash at the Covell Hotel, which houses the restaurant/wine bar downstairs. Guests and employees were evacuated as an inspector from the LA Department of Buildings and Safety determined whether the building was safe.

The best thing is to go to Kato’s Resy page to reserve a table. The restaurant will reopen in the former Mr. Georgina space on February 8, although February appears to be fully booked.

Harissa Restaurant and Got Kosher Deli are closed from January 23rd. Owner Alain Cohen announced via Instagram that Got Kosher will focus on a wholesale bread operation instead. In the post, Cohen notes that the change is due to several factors: COVID-19, a downturn in business, a shortage of employees, plus the landlord selling the building. According to Forward.com, Cohen operated Got Kosher as a catering company before opening it as a restaurant in 2010.

Is LA a carb-loving city? You bet your gluten is

Food & Wine has scoured the country for the best bread and has added some of LA’s best breads to its list, including the popular Colossus Bread, Gusto Bakery and Jyan Isaac Breads. A nice selection, but the area has a mass of reliable makers, including Lodge Bread Company, Bub and Grandma’s, Superba, Rockenwagner, Breadblok’s gluten-free products, and République.

In October, the Los Angeles City Council passed an ordinance requiring customers to provide proof of a COVID-19 vaccination to enter covered restaurants. But to date, city law enforcement has not cited a single company for violating these rules, even though the city is receiving hundreds of complaints about it, writes the Los Angeles Times.

A pinot and pork pop-up sandwich

Vintage Studio City wine bar is hosting a pop-up tonight with Bad Jew’s Rebecca King and Central Coast’s Say When. It’s quite the combination with the winemaker pairing sips with King’s signature sandwich, the “reubecca” with porkstrami, melted havarti, Russian dressing and sourdough sauerkraut from Gemini Bakehouse. It operates from 5:00 p.m. to 10:00 p.m.

Snapchat is rolling out updates to its AR shopping feature