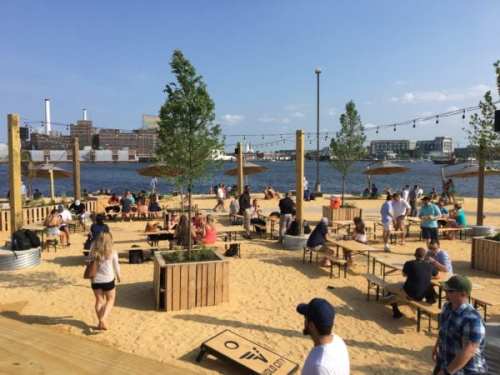 Sandlot, the popular beach bar and recreation area at Harbor Point in Baltimore, will open for a sixth season next month with a new location and new operators.

Beatty Development Group, the master developer of Harbor Point, today announced that a grand reopening of the seasonal attraction is scheduled for Memorial Day weekend, Saturday May 28 through Monday May 30.

Bar Movement will take over Sandlot’s operations for 2022. Its owners and operators, John and Mary Miller, “will bring a new flavor to Sandlot this season with a fun and creative fresh bar program supported by rotating offerings from favorite local food trucks. and guest-chef appearances throughout the warmer months,” Beatty said in his announcement.

Sandlot started in 2017 as a joint venture between Beatty and restaurateurs Spike Gjerde and Corey Polyoka of Foodshed Restaurant Group. The idea was to create a temporary attraction that would help draw people to the Harbor Point waterfront until the area was ready for construction. It has always been a seasonal operation, opening around Memorial Day and closing after Labor Day.

Beatty executives weren’t sure the area would be available this year as construction begins on several major projects at Harbor Point, including a new headquarters for T. Rowe Price. The developers decided to move the location to the far west of the 27-acre Harbor Point property, facing downtown and the city skyline, which provided space away from the construction.

To take advantage of the west-facing location, the Millers introduce “Sunset Beach at Sandlot”, capitalizing on the site’s “golden hour” views of downtown and sunsets visible from Harbor Point.

Bar Movement will serve a mix of craft cocktails, canned beer and non-alcoholic options from the retrofitted shipping containers and classic Airstream trailer from previous seasons. Three sand volleyball courts have been relocated and will host beach volleyball and cornhole leagues run by Volo City Sports. Additional weeknight and weekend programming is still being finalized and will be announced soon on www.sandlotbaltimore.com.

“Sandlot is by far the most unique place to enjoy the sunset in Baltimore,” the Millers said in a statement. “There’s a great laid back vibe and stunning views. Bar Movement is excited to be part of this next chapter for Sandlot, and we can’t wait to bring a new style to the space.

Located between Harbor East and historic Fell’s Point, Harbor Point is a 27-acre mixed-use neighborhood with a planned three million square feet of commercial, residential, office and hotel uses, as well as 9.5 acres of open spaces. In addition to the T. Rowe Price headquarters, construction begins this year of 550 apartments, 1,250 parking spaces, a hotel and commercial space on the ground floor.

“We just can’t leave Sandlot,” said Michael Beatty, president of Beatty Development Group. “The future of Sandlot has been one of the questions we’ve been asked the most since the end of last season. We know people love him and throughout the development of Harbor Point over the past year, we’ve continued to stay open to keeping the spirit of Sandlot alive and well, and we’re excited to bring it back for a bit longer.

Ed Gunts is a local freelance writer and the former architecture critic for The Baltimore Sun.